Historically, the Netherlands used a waterlinie, a series of “water lines” many miles long, as an ingenious means of defense, made up of waterworks and fortresses. It’s not surprising in a country that is so focused on keeping the sea at bay and regulating its water that the water itself would be used for defense: strips of land could be flooded during an attack to keep the enemy out. Today, the Netherlands still has more than a hundred fortresses along water lines. Many have become nature reserves, or there is a restaurant or B&B where you can enjoy a delicious drink on your way!

The tour leaders of Boat Bike Tours will happily tell all about the water lines during cycling and boating holidays. They have selected five beautiful places on our tours especially for you, which are certainly worth a visit. 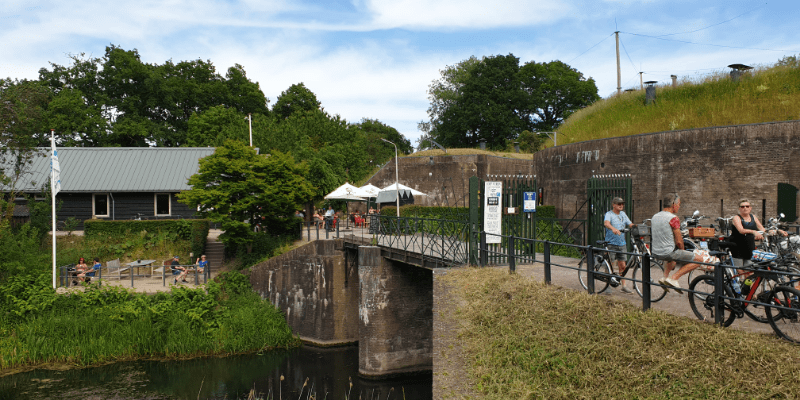 Fort Vuren is a tower fortress, which lies to the east of Gorinchem. It was part of the 53-miles-long New Dutch Water Line, which ran from Pampus to Biesbosch and had more than forty fortresses. A tower fortress consisted of several floors and was surrounded by a moat. With the arrival of new artillery and grenades, this sort of fort turned out to be too fragile and a rampart was often built on the enemy side. Fort Vuren is located on the Waal River.

“The fort is beautifully situated, with Loevestein Castle on the other side of the water,” says tour leader Thomas Wuts. “I especially find the story behind the forts interesting. The fact that you use water to defend yourself and build forts in weak spots is very special.” Fort Vuren has a free-access museum about aviators in the Second World War. A restaurant with a conservatory and terrace has been built on the old foundations of the fort watchman’s house. A perfect place to take a break for the cyclist! 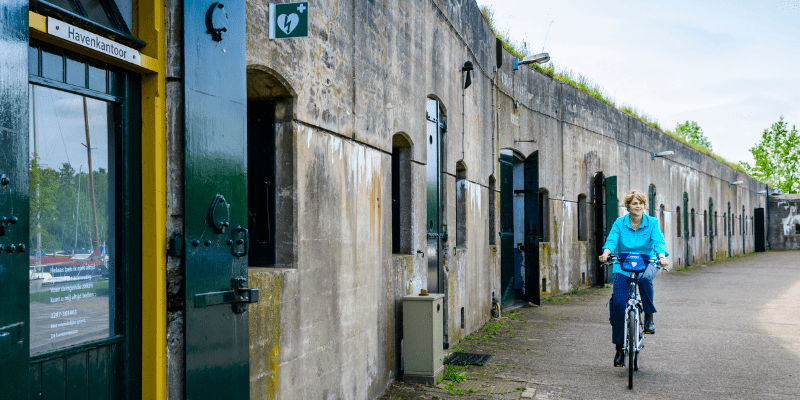 Fort Kudelstaart is part of the Defense Line of Amsterdam, an 84-miles-long line of defense. The dozens of forts, dams, locks and ramparts were built to defend the city of Amsterdam, but there was no fighting. The Defense Line has been a UNESCO World Heritage Site since 1996. Today, Fort Kudelstaart is best known for its cozy family marina. Two concrete positions for artillery can be seen in the front wall.

“Fort Kudelstaart is a small fort, but its location is very special, near the Westeinderplassen [a complex of lakes],” says tour leader José Klein Hesselink-Sluis. “The time of year when I usually get there is also special. During the tulip tours, we cycle past the fort at 5:30 in the morning, on our way to the flower auction, which is full of activity very early in the morning. There is no traffic outside. You can hear the birds, geese and ducks walking on the road.”

In addition to the tulip trips, the trip “Green Heart of Holland” also goes past Fort Kudelstaart. 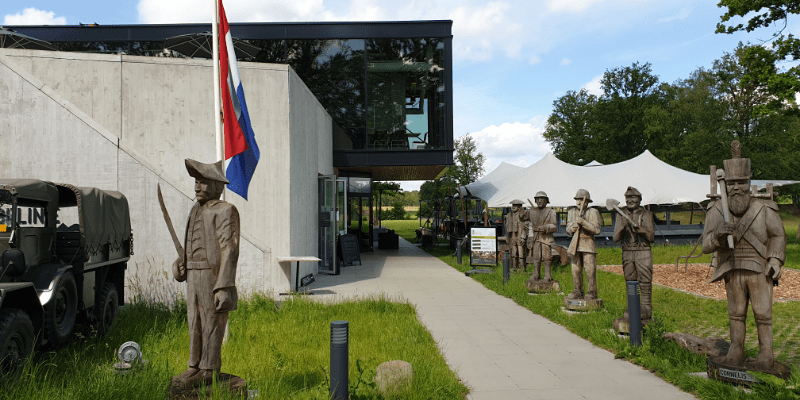 The Grebbe Line served as a forward defense line for the Dutch Water Line and ran through the Gelderse Valley. Fort aan de Buursteeg is one of the largest and most important defenses. Hundreds of soldiers were able to camp within its walls. Tour leader Thomas Wuts suggests visiting the fort because the Grebbelinie Visitor Center is located there. “I cycled past there recently. A great place to learn more about the water line.” There is also a restaurant where you can enjoy a delicious cup of coffee in the middle of nature.

Westbatterij Muiden is located at the mouth of the Vecht River on the west bank. “On the dike next to this fort you have an enormous panoramic view over the IJsselmeer, with the fortress island Pampus,” says tour guide Tom Stout. “You can also see Muiderslot Castle. There is even a small beach for real water lovers.” By the beginning of the fifteenth century, the Dutch had already reinforced this place, which was expanded further over time.

The tower fortress at Westbatterij Muiden was built at the end of the nineteenth century as part of the New Dutch Water Line, but was later added to the Defense Line of Amsterdam. Its primary task was to defend the port of Muiden and prevent enemy landings on the Zuiderzee Dike. In the basement were quarters for the eighty-five soldiers, the kitchen and the washrooms with toilets. Upstairs there were eleven gun rooms, each with three loopholes.

Westbatterij Muiden is on the route of the journeys “Amsterdam – Antwerp” and “Hansa Highlights“. 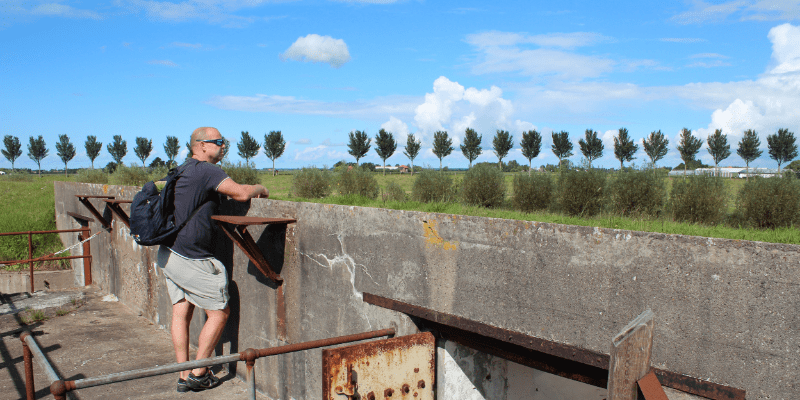 Hidden in the Beemster polder landscape – a polder is land reclaimed from sea or lake – is the largest fort of the Defense Line of Amsterdam: Fort bij Spijkerboor. Visitors can take a look at the ammunition chambers, cannons and armored turret guns. “It’s an impressive fort, where I always tell guests a nice story about the Defense Line of Amsterdam,” says tour leader José Klein Hesselink-Sluis. “I was able to see it from the inside myself; it’s incredible how it was built.”

“Merchants were terrified that Amsterdam would be attacked,” says José. “That’s why the Defense Line had to be built. Spijkerboor is so special because it is huge. Yet the fort blends into nature. If you cycle there, you have to look closely and drive into the entrance path a bit before you can see the armored dome. Then to think that the fort was ultimately only used as a prison! Inside it is decorated as before. I think it’s special that the fort is still so complete.”

Want to visit the Fort at Spijkerboor? This is possible on the trip “Northern Tour of Holland“. 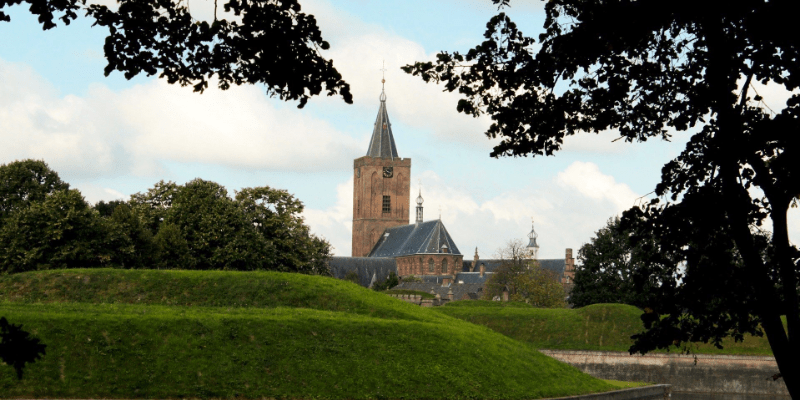 Tour leader José calls it a “topper” on the Hansa Highlights route of Boat Bike Tours: fortified city Naarden. “Before you reach the city, you can see the canals, old trees, huge walls and a gate that you drive underneath. There are small old cobblestones on the road, so that’s bumpity-bump on the bike! Naarden is built in a star shape. There are beautiful buildings, such as the old town hall and a church with a particularly beautiful painted ceiling. If you leave the city, you will see the beautiful walls and the water again, but also a number of fortification walls.” 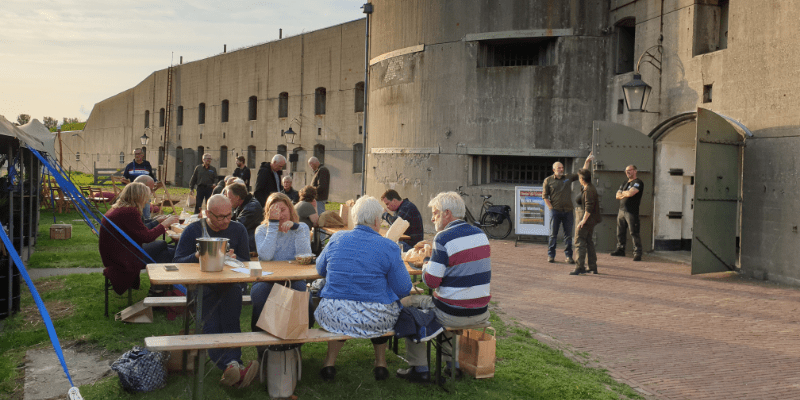 Would you like to see the water lines? Boat Bike Tours offers various trips where a special fort or beautiful fortified city can be visited along the way. Keep an eye out when you’re biking because the forts are often hidden behind a lot of greenery. Be sure to ask our tour leader for advice! These buildings are not only interesting because of their history. They also often serve as a beautiful spot for a break: a great place to relax!