Who wouldn’t want to spend a day shopping or soaking up history in the old center of Amsterdam or hip Rotterdam? The Netherlands has plenty of hotspots.

But there are also lots of great places that have not yet been overrun by tourism. Especially now, in the age of corona, it’s fun to discover the hidden gems where it’s not so busy, and where you can cycle through ancient streets or savor a cappuccino with a view of the water.

The great thing about a cycling and boating holiday with Boat Bike Tours is that you will automatically pass through these beautiful places! Whether you’re looking for stories from history or you’re more interested in unique shopping, you’ll find it in these lesser-known locations!

We have selected five hidden gems for you that we have included in our travels: 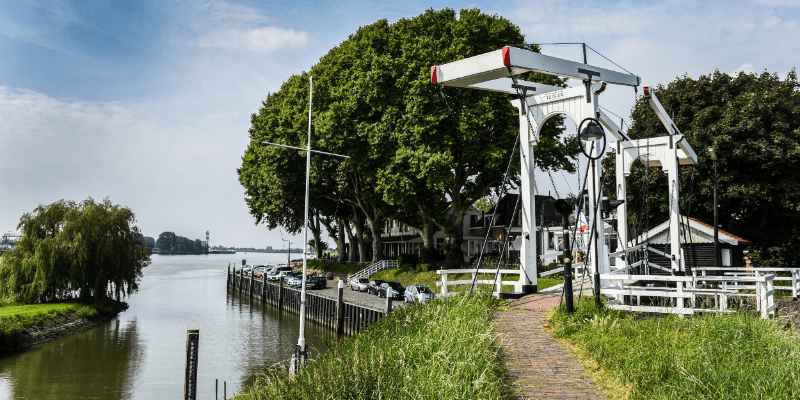 Silversmiths on the Lek River

In a beautiful location on the Lek is Schoonhoven, a historical fortified town with a gate that still closes at high tide. While enjoying an ice cream, you can watch the ships sail by. Storks and geese fly over, and you might even spot a beaver. The fortified city was part of the Old Dutch Waterline and grew into a silver city in the nineteenth century. There are still many silver and goldsmiths who you can see at work in their workshops. Outside Schoonhoven is a peat meadow area with many farms. The ferry takes you to the other side of the Lek, where you can see another charming fortified town: Nieuwpoort.

Our trips that include Schoonhoven: 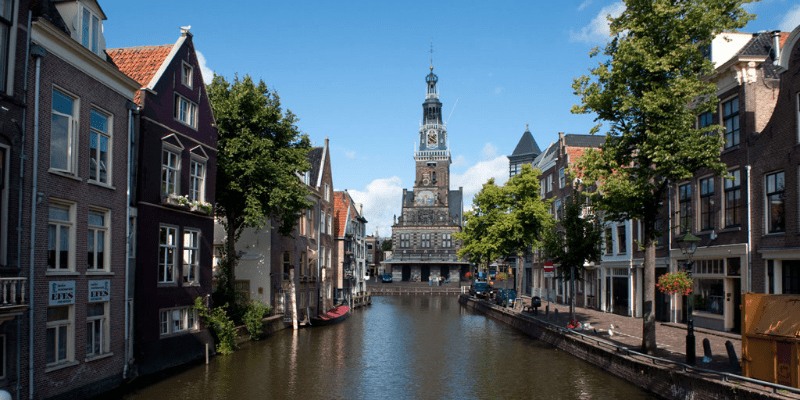 The Waag and quiet hofjes

Alkmaar, in the province of North Holland, is known as a cheese city, but also has a beautiful center. Hidden behind gates are six hofjes, courtyard complexes that go back centuries to when they were almshouses. Each one is an oasis of tranquility. If you cycle around the city, you will pass canals and ancient buildings, like the old town hall in Gothic style and the Waag (the old weighing house) with its beautiful belltower. The city moat has been well preserved too. When you sail past the city, you’ll have a good view of the 17th-century customs tower, where merchants once paid their taxes on goods they brought into the city.

Our trips that include Alkmaar: 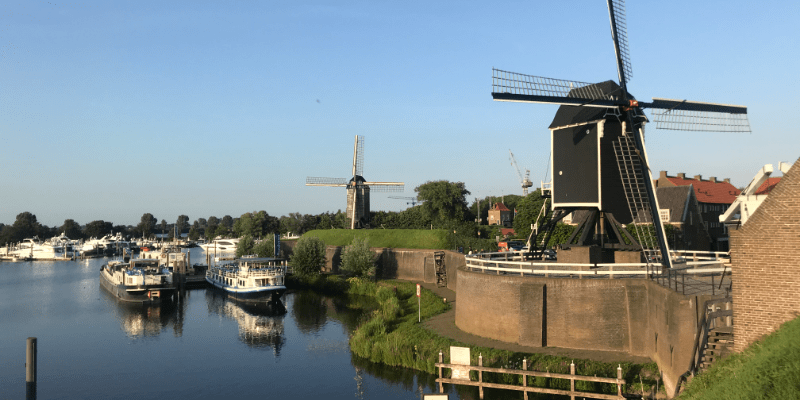 An atmosphere of days gone by

Heusden’s history as a fortress town is palpable in almost every street. History comes alive in the 17th-century alleyways and along the fortress walls. Old-fashioned street signs hang from the buildings, while the carved plaques on the façades drop hints about the former residents. It’s not a surprise that the city won the prestigious Europa Nostra prize for restoration. Heusden was one of the very first Dutch cities to be enclosed in a city wall, some of which still stands. The Governor’s House museum tells more about the city’s history, and there are plenty of art galleries, shops and cozy restaurants as well.

Our trip that includes Heusden: 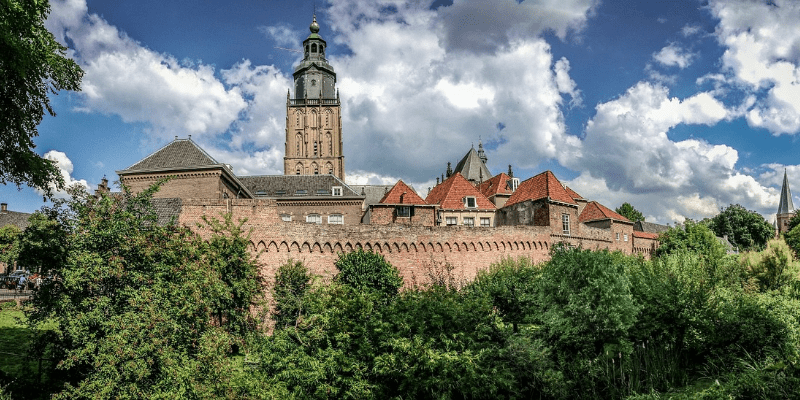 Historic buildings with the best shops

Zutphen is one of the oldest cities in the Netherlands, with no fewer than 450 nationally protected historic buildings. You’ll cycle past historic warehouses, merchant houses and medieval almshouses. In the Middle Ages, Zutphen was known as a quirky Hanseatic city. Today you’ve come to the right place for the best unique shops. Think of boutiques full of beautiful paper, bird-related articles or American candy. Zutphen is also bursting with cafés and restaurants. “The true epicures come here: those who love delicious food, a good glass of wine or a whiskey,” says Willem Schimmel, owner of the eponymous cigar specialty shop. Zutphen’s location on the IJssel River is beautiful too.

Our trips that include Zutphen: 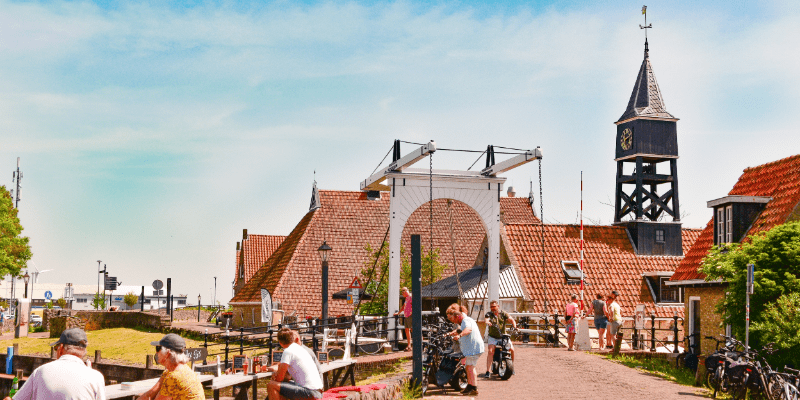 Its own Frisian language

It looks like you are cycling into a painting when you reach Hindeloopen on the IJsselmeer. The former wealth of the Frisian town can be seen in the richly-decorated façades and beautiful interior art. Wooden bridges hang above the canals and the harbor with sailing boats is also picture-perfect. Hindeloopen traded early on with England, Scandinavia and the Baltic countries. Because the residents mainly worked on behalf of Amsterdam merchants, they had little to do with the Frisian hinterland and developed their own language and traditional costume. Hindeloopen is one of the cities that the Elfstedentocht (11-cities ice skating race) passes through, but it’s also worth a visit when the weather is good!

Our trips that include Hindeloopen: 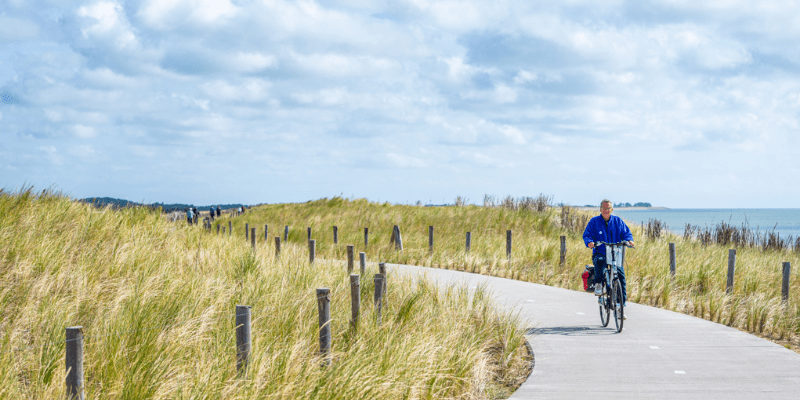 Does reading this make you want to see some of these undiscovered spots? Traveling by boat and bike makes it even more fun! During a Boat Bike Tour you’ll see many more hidden gems than we’ve listed here, and many more than most visitors to the Netherlands get to see. Our tours are truly off-the-beaten-path! How about the wonderfully charming little Hanseatic city of Hattem, set between the beautifully wooded Veluwe National Park and the floodplains of the river IJssel? Or the quaint little town of Oudewater, possibly one of the oldest in the Netherlands? Enkhuizen is another lovely town you could visit, once an important harbor for the Dutch East India Company, and now home to a fascinating living museum about its storied past. Sneek (pronounced like snake!) in Friesland will bewitch you with its picturesque streets and canals and cafes.

To inspire you even more, we’ve made an e-book of undiscovered places, travel stories and the best routes to explore. It’s free! Ask for it here:

If you have any questions about our offerings, mail or call us at +31 (0) 2072 35 400. We’re happy to help you choose which boating and biking vacation would suit you best. No obligations!