> Blog > 10 great places for your summer vacation in Friesland!

10 great places for your summer vacation in Friesland!

The province of Friesland has it all: wide landscapes, wild and romantic islands, tiny historical towns and beautiful natural areas. Especially in summer, when the meadows are in bloom and the cows are in the pastures, you can spend wonderful long days in the fresh air here. And you can enjoy what Friesland has in abundance: water! Take a boat across the IJsselmeer, spend a day at the beach on the island of Terschelling, or bicycle along the shores of the Frisian lakes. Feel that vacation feeling!

We have collected our favorite places in the province of Friesland so that you know what you shouldn’t miss on your next trip!

1. The island of Terschelling

Terschelling is a real dream island in the North Sea because a lot of the island is in its natural state. The white sandy beaches are up to 500 meters wide in some places: more than enough space to sunbathe, build sandcastles and take walks on the beach, even in the high season. In addition, you should definitely take a bike tour through the lovely dune landscape. As a cyclist, you have the bike paths all to yourself and, instead of the noise of cars, you’ll only hear the wind, the surf of the North Sea and the many sea birds. Especially in the east of Terschelling, the dunes are so extensive that cyclists are few and far between.

2. The Planetarium in Franeker

The pretty and tranquil old town of Franeker is worth a walk in and of itself. But behind the facade of one of the historic canal houses is a museum that will amaze you. In the Eise Eisinga Museum, you can admire the oldest mechanical planetarium in the world. Here the weaver Eise Eisinga constructed a true-to-scale model of the solar system in the 18th century … on the ceiling of his living room! Centuries later, the mechanism is still running precisely to the minute.

The Wadden Sea is the most untouched piece of nature in the Netherlands. Whether you explore it on a mudflat hike (which you should never do on your own!) or cross it by boat, there is a lot to see. Watch the millions of seabirds that inhabit the UNESCO-protected nature reserve. And with a little luck you can spot seals and brown whales. Be sure to pack binoculars!

4. Cycle tour on the IJsselmeer dike

The cycle route from Hindeloopen to the harbor town of Stavoren leads directly along the banks of the IJsselmeer. In the first half there is not much to see, at least from a bicycle saddle, because the road runs along the bottom of a dike. But it’s worthwhile to park your bike at one of the dike’s stairways and climb up to the top of the dike.

There are some lovely beaches right next to Hindeloopen. A little further, in the bay near Molkwerum, you can reach a bird-watching hut after a short hike (follow the signs to the vogelkijkhut). There you can see three small islands where many species of birds such as gray geese, avocets and common terns breed.Shortly afterwards the cycle path leads up to the dike and you have a great view of the IJsselmeer. On the way you will probably have to step around the tame sheep and their lambs that keep the cyclists company on the dike. 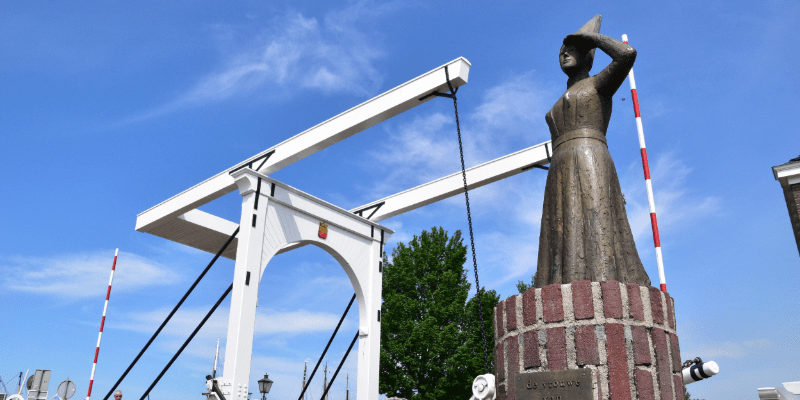 5. Strolling through the city in Sneek

Even if Sneek is one of the larger cities in Friesland, it is still very cozy here. Several canals run through the center where you’ll see beautifully-restored historic buildings and many cute shops and cozy cafes. In summer, Sneek becomes the meeting point for boat tourists who cross the Frisian lake district with their yachts and sailboats in sunny weather, creating an almost Mediterranean atmosphere.

The great thing about the cycle paths in Friesland is that they repeatedly lead through special natural areas, and the route through the Alde Feanen National Park is one of the most beautiful sections. If you cross the varied wetland with its widely-branched lakes, fens, floating plant life, swamps, moors and peat areas, you will come across a number of rare animal and plant species. Not only do sundew, swamp violets and meadow knapweeds grow here, but also wild orchids. In addition to bitterns, spoonbills and storks, the national park offers habitat for otters and sea eagles. If you want to know more about the flora and fauna of the Alde Feanen, the best way to start your discovery tour is at the visitor center in Earnewâld.

As you stroll through the narrow cobblestone streets of the tiny town of Hindeloopen, you can easily imagine how people lived here in past centuries. With its crooked houses and its narrow canals with their picturesque bridges, it almost seems as if time has stood still. Choose one of the cafés around the marina and enjoy the view of the IJsselmeer and the hustle and bustle of the boats over a cup of coffee. If you still have a little time, you can visit the rustic Frisian ice skating museum here. 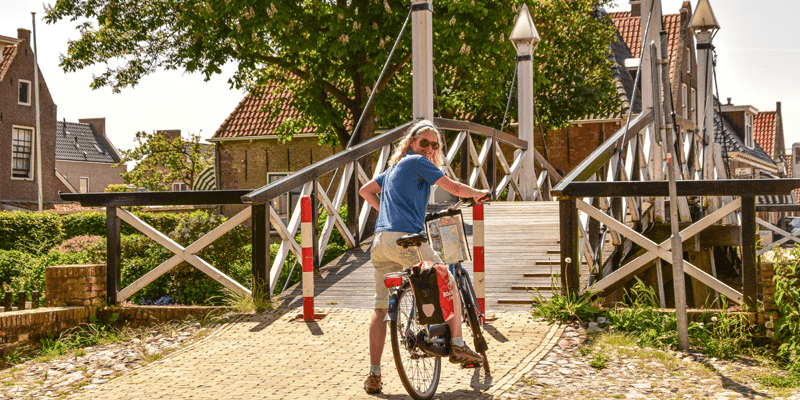 What the Tour de France is to France, the Skûtsjesilen is to Friesland! Never heard of it? We’re happy to explain what’s behind it: as skûtsje is a traditional Frisian flat-bottomed ship and skûtsjesilen translates as “skûtsje sailing”. In the past, the skûtsjes were used as cargo ships that were perfect for the shallow waters of Friesland. Nostalgia for these magnificent old ships led to the creation of a 14-day sailing competition, which keeps all of Friesland in suspense every summer. Different cities and villages compete against each other with their own skûtsje. It’s an impressive sight to watch the majestic sailing ships from the shore maneuvering to win the race!

What do you think of when you imagine the perfect summer bike tour? Maybe on a narrow bike path in the middle of nature, with a view of the water and lush green meadows? The sun is shining and a refreshing, gentle breeze is blowing. The bike routes around the Frisian lakes are wonderfully quiet and idyllic. If you’ve remembered to pack your bathing suit, you can easily find a jetty or a small beach on the way, where you can jump into the water. Don’t worry: the water temperature is usually very pleasant because the lakes in Friesland are rarely deeper than about six feet and warm up quickly in the sun.

10. The cliffs of Gaasterland

With its gently curved moraines – debris left by glacial movement – the IJsselmeer coast in the south of Friesland is somewhat reminiscent of Denmark. In this region, also called Gaasterland, you will find the only three cliffs in the whole of the Netherlands: in Oudemirdum, in Mirns and the Rode Klif near Warns. These cliffs can’t compete with the majestic cliffs of Dover or the island of Rügen, but from here you still have a great view of the beautiful landscape.

Get in the holiday mood

Would you like to read through our tips for your holiday in Friesland in peace? No problem! Simply request our e-book on the subject of Friesland! In it you will not only find our top 10, but also lots of great photos and suggestions for bike tours.

Are you in the mood for a holiday in Friesland? Boat Bike Tours offers various trips that will take you to this diverse and pristine province that is untroubled by mass tourism. The Discover Friesland tour goes right across Friesland and includes a trip to the island of Terschelling. The IJsselmeer, Gaasterland, the Frisian lakes and the south of Friesland are all part of the Northern Tour of Holland and the Sail & Bike IJsselmeer & small Frisian cities tour. The Sail & Bike Wadden Sea tour sails to the island of Terschelling and across the Wadden Sea, and includes the western coast of the IJsselmeer in its bike routes.

Still finding it hard to decide on a trip? Do you want advice or do you have any questions about what we offer? Our travel experts are happy to help!