> Blog > 5 types of water management in the Netherlands

5 types of water management in the Netherlands

It shouldn’t come as a surprise that the Dutch are water management experts! Anyone who cycles and sails through the Dutch landscape will see structures everywhere that ensure that our feet stay dry. More than half of the Netherlands is below sea level, after all, so locks, pumping stations and dikes are badly needed. For centuries, water even played a role in defense.

Those who don’t have an eye for all that skilled engineering and history can just pass it by. But that’s the nice thing about a cycling and boating holiday at Boat Bike Tours: you are right on top of it! Our tour leaders give tips on board, so that you know exactly where to go and what to see. 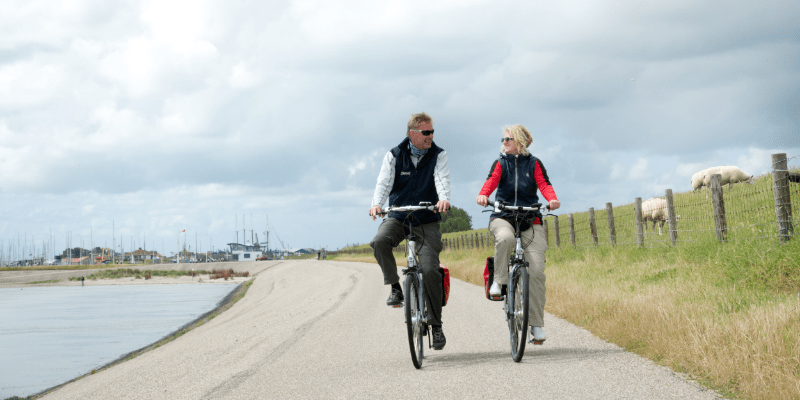 Here are five forms of water management in the Netherlands:

Throughout the country there are miles of water lines with ingenious waterworks fortresses and fortifications. Wide strips of land could be flooded to stop the enemy. There are still more than a hundred fortresses in the Netherlands as a reminder of that time. They are often hidden behind exuberant greenery. Nature is now taking its course; birds are singing. Many entrepreneurs run a restaurant or B&B in a fort, so you can have a drink on the terrace!

For example, around Amsterdam is the Defense Line of Amsterdam. Hundreds of men kept watch, but no shot was ever fired. “That enormous project was completed in a short time, from 1880 to 1914,” says tour leader José Klein Hesselink-Sluis. “The line is 84 miles long. It consists of 42 fortresses, dikes and locks. Spijkerboor in the Beemster, for example, is a very impressive fort, where I tell guests a great story. It’s unbelievable how that was built. ”

Want to visit the Fort at Spijkerboor? It’s possible on the trip “Northern Tour of Holland” 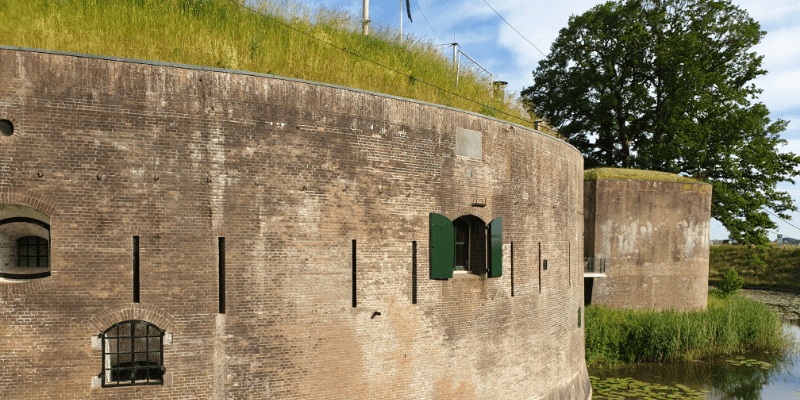 Locks: Pass through a lock yourself

Locks are located between two waterways with different water levels. On both sides there is a movable door that can open and close to let water flow in or out. It is very easy to see how such a lock works on a ship. The sailors tie up the ship fore and aft. Not too tight, so that the ship ride the water as it sinks or rises. In the meantime, they follow the instructions of the lockkeeper. Lockkeepers don’t get nervous when you watch; they’ve done this hundreds of times!

To tour leader Tom Stout, the Princess Beatrix lock where the Amsterdam-Rhine Canal meets the Lek River is very impressive. He still remembers that the ship was once stuck due to a malfunction. To him, the lock Benedensas near Steenderen in Brabant is idyllic. “As a cyclist you have to push a button, after which a pedestrian bridge rolls up on train tracks. When the bells start to ring, you have to be quick, then the bridge will roll back again.” With a group of cyclists, it can take a while before everyone is on the other side. “Fortunately there is a nice place to wait!”

The ship sails through the Princess Beatrix locks on several cycling and boating holidays. The lock Benedensas is on the route of the journey “Amsterdam – Bruges”. 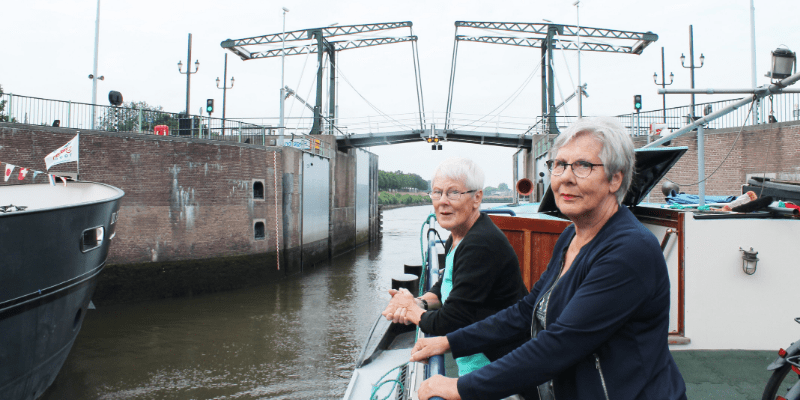 The Delta Works: The largest storm surge barrier in the world

The South Holland and Zeeland islands have a centuries-long history of flooding and dike breaches. The flood disaster of 1953 was devastating and led to the construction of the Delta Works, the largest storm surge barrier in the world. Five storm surge barriers, three locks and six dams not only protect the Netherlands against the sea, but also contribute to a better freshwater supply. American engineers have already placed the Delta Works in the list of seven modern wonders of the world.

Tour leader Thomas Wuts often gives a presentation about the Delta Works on board the ship during a bike and boat holiday. “I show videos in which you can clearly see how the flood defenses work,” he says. The tour guide also likes to visit the Watersnoodmuseum (Flood emergency museum) on Schouwen-Duiveland. “It is housed in four enormous caissons, which came from England after the disaster to fill the holes in the dike. I also always tell about the Second World War. The Germans then flooded pieces of land to stop the Allies.

The Amsterdam – Bruges tour takes you along parts of the Delta Works. 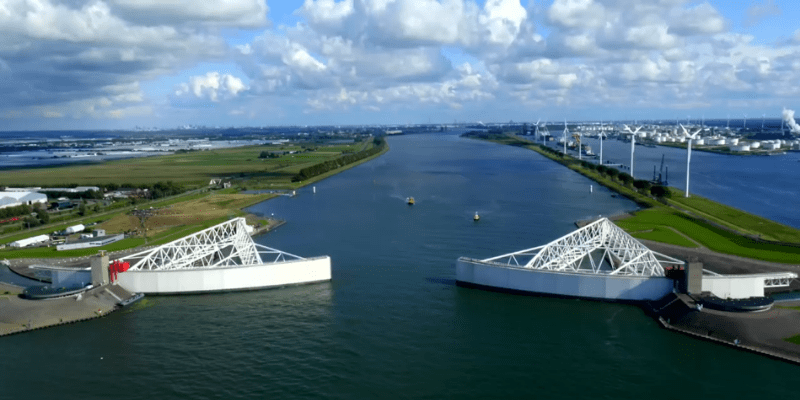 When in the fifteenth century it became apparent that the lowered water level in the polders could not be maintained in a natural way, the Dutch built polder windmills in the west and north of the country. The mill’s scoop wheel or screw wheel carries the excess water to an elevated area, after which it flows towards the river or sea. Now that it is raining more often and harder due to climate change, the mills are sometimes used again.

Tour leader Thomas Wuts always loves to visit the Museum Mill in Schermerhorn. “Inside it is full of maps. The miller can tell you very well about the Beemster, an interesting polder. It is never busy, there are not that many people in that area.” More than four hundred years ago, the Dutch succeeded in draining an inland lake, called Beemster, using windmills. “The village of De Rijp used to be an island; it is difficult to imagine as you stand there, surrounded by dry land.”

The Museum Mill is on the cycle route during the trip “Northern Tour of Holland”. 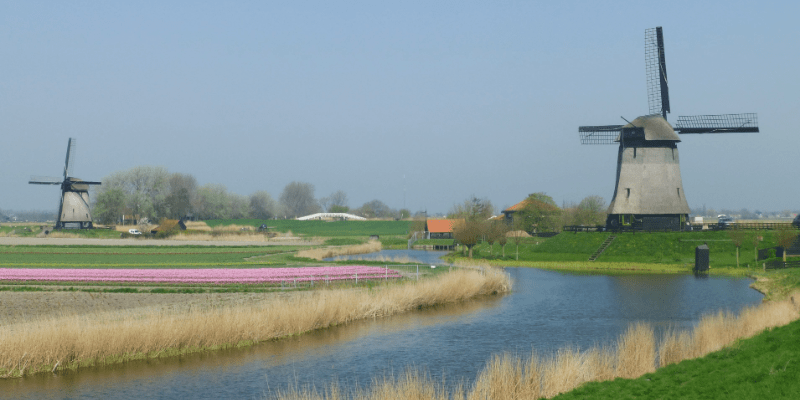 The pumping station is an invention from the nineteenth century. Like a windmill, it takes water from a lower to a higher level. Because it is powered by motors and does not depend on wind, it always works. A pumping station is also much stronger than a windmill. It can pump out more water, and faster too. Nowadays, pumping stations ensure that the water level in the polder remains good. This is important for agriculture and livestock in the area.

“The Woudagemaal pumping station in the Frisian town, Lemmer, is super beautiful,” says tour leader Thomas Wuts. “You can get a very nice tour there. The building really appeals to the imagination and radiates power. ” The Woudagemaal, dating from 1920, is the oldest working steam pumping station in the world and a UNESCO World Heritage Site. “After all this time, it is still being used, which is unique.” The machine hall alone is a work of art with its natural stone, oak wood and decorative edges.

On the Sail & Bike IJsselmeer & small Frisian cities voyage, the hotel ship will spend a night in Lemmer. 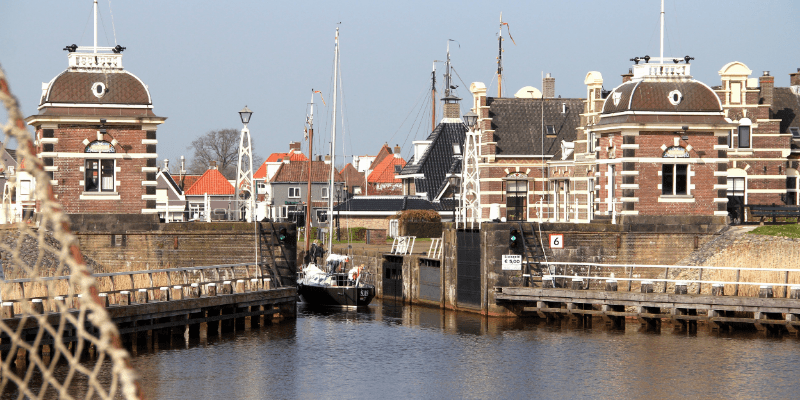 Are you curious about water management in the Netherlands and would you like to learn more about it? Then join a cycling and boating holiday from Boat Bike Tours. You can see all that beauty up close by bike and boat! That is a lot more fun than just reading about it. Our tour leaders are full of beautiful stories, which they are very happy to share with you. 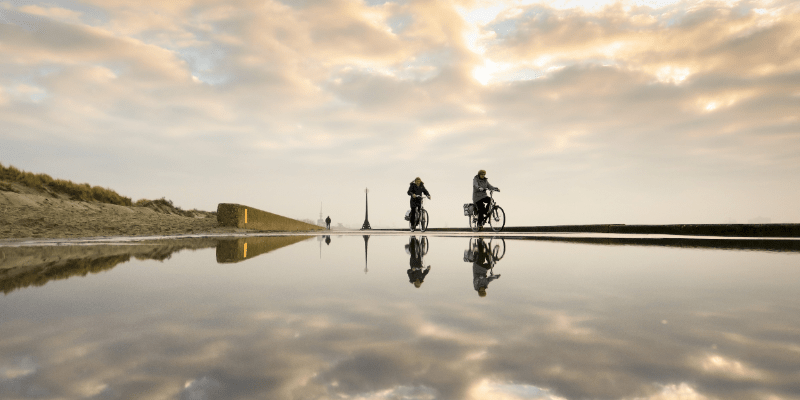