A Boat-Bike-Ukulele Tour with Ralph Shaw

I was booked by UkuleleAdventures.com to travel with, and teach ukulele to, a group of ukulele enthusiasts aboard the sailing ship Leafde fan Fryslân run by Bike-Boat Tours. The 3-masted ship was to chug her way along canals – eventually to sail on the open sea – as we pedalled along polders and cycled through villages to each new port of call – all under the guidance of Captain Eelke and Hugo, our multilingual tour guide.

My job onboard was to lead ukulele time in the form of classes and play-along sessions. Preparation for this began pre-tour, creating, with Elaine the tour organizer, a specially-themed songbook about the Netherlands, cycling, sailing and the weather. The finished pdf book bulged with great playable music and was emailed to all the travellers.

Climbing aboard I found my fellow passengers to be an enthusiastic group who were already on deck singing songs from the songbook as we took in the sights of the Amsterdam shoreline.

Away from the city the crew unloaded the bikes and tour guide Hugo adjusted each vehicle accordingly. Not only was Hugo responsible for keeping riders safe, he also had to be familiar with the routes, sights and history for our week-long sojourn, all this while communicating in no less than three languages: English, American AND Australian.

Hugo, easily visible in his neon yellow helmet, led us on an easy 8-kilometer ride where I noticed that every home in Holland seemed to have a water view. Much of the Netherlands has been reclaimed from the sea, but standing on a dyke, with the sea on one side and houses that are metres below sea level on the other, I experienced a pang of unease – as if in the presence of something unnatural – like an upside-down tree, blue peas or a cat playing chess. 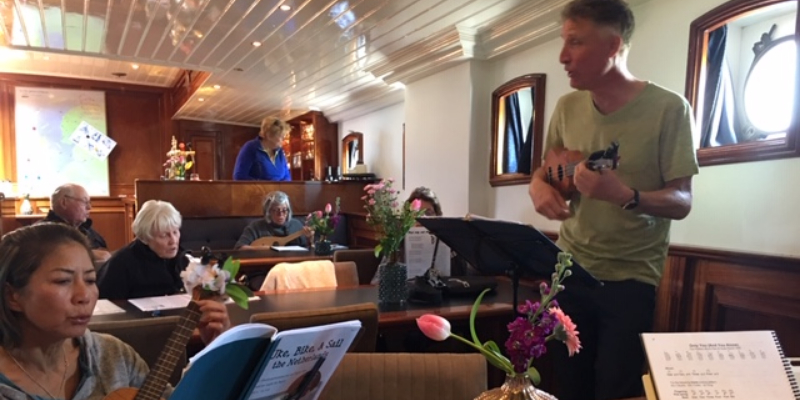 Hugo, a master story-teller, stopped at a statue of The Little Dutch Boy “who symbolizes the perpetual struggle of Holland against the water.” Most of us have heard about the boy who, on noticing a leaking dyke, shoved his finger into the hole to plug the leak until help arrived.

But there’s more to this story and Hugo, still in his bike helmet, threw himself into the drama of the tale, hurling himself full length onto the road-bricks where he rolled and struggled as he re-enacted the boy’s epic battle with the torrent. We watched this man yelling and fighting for his life on the floor of the town square and loved it – what an entertainer! We need more of that in this world.

Back onboard we settled at tables as the chef walked the centre aisle making our tastebuds tingle with a tantalizing speech of what we were about to enjoy:

“Tonight, we have a beetroot salad with Italian parma ham.”

“Then for main course we have tenderloin…”

“With carrots and baked rice and a sauce of mushrooms and onions.”

“And for dessert we have…” (Pausing for effect before pointing a finger in the air and saying) “CHOCOLATE PIE!”

He stood a few seconds grinning at us, hands clasped in front of him, before turning back to the kitchen. We cheered again and sang Hey Good Lookin, What You Got Cookin’? I’ve said it before and I’ll say it once more, ukulele people are the best.

After dinner I led a playing session, thrilled to be singing Jacques Brel’s Port of Amsterdam, while actually moored at a port in Amsterdam.

How our cycling days looked

Breakfast was fresh bread, sliced cheeses, meats, muesli, yogurt, good coffee and little packets of chocolate sprinkles (a Dutch staple!). We made our packed lunches and departed on our first daytrip. I took pleasure in cycling through a mostly flat landscape. Where I live – everything is uphill. 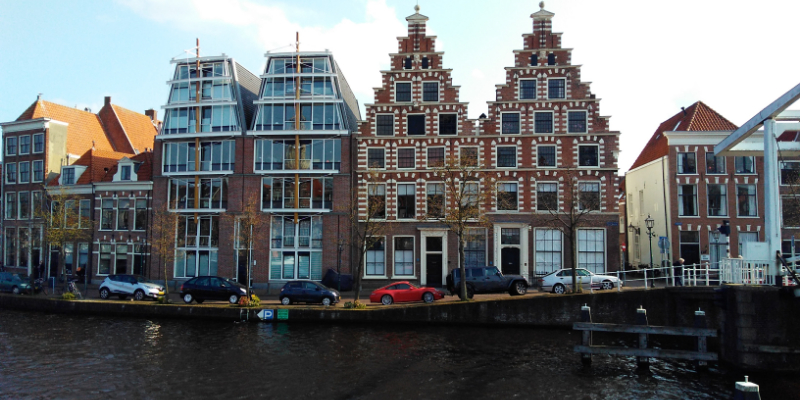 After passing hundreds of hectares of fragrant tulip fields we arrived at the finest showcase the tulip industry has to offer: Keukenhof Gardens. Seven million spring-flowering bulbs grow and flow along verdant borders creating swirling patterns and shining mosaics of waving colour.

I was also delighted by an ingenious mechanical music machine that played all the instruments according to sheets of cardboard punch cards. The cleverness of the invention reminded me of the brilliantly inventive windmills the Dutch created to perform multiple tasks. 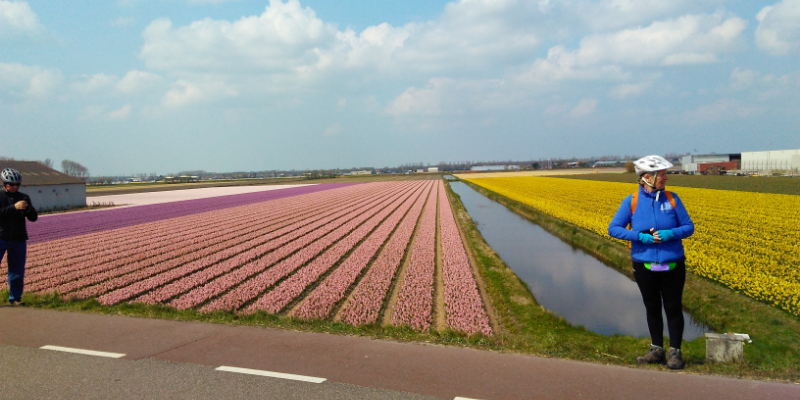 Every day was a feast for the senses. Even Dutch architecture is whimsical. The 12-storey Inntel Hotel, Zaanstad, for example, looks like twenty buildings stacked into a rough cube. You look at it and think, “Was this crazy building really worth all the effort and cost?”

At Zaanse Schans, a working museum of Dutch innovation, we saw clogs for all occasions: work clogs, Sunday clogs and roller-skating clogs. There were even sexy high-heeled lingerie clogs for the boudoir (I made that last one up, but hey – why not?)

Afterwards, in the gift shop, I tried on a bright yellow pair of clogs. And I might have bought them, if I’d had any room left in my carry-on.

After visiting an oil-producing windmill we learned how wind-power was the force behind Dutch world trade domination in the 1600s. It was an extraordinary learning experience.

Every day, when time allowed, I offered a different lesson in some aspect of ukulele playing. Music is a great unifier and it’s notable that the ukulele players who came on the tour began as strangers but ended up singing together as old friends. I believe this common musical interest added an extra dimension of joy to what was already a wonderful experience.

With the week over we said our goodbyes. I had a few hours in Amsterdam before my flight but I missed having a ship to go back to. I liked having a moving hotel follow me around as I pedalled over bridges and polders.

I truly hope one day to come back again. Maybe next time I’ll save room in my case for a pair of bright yellow clogs!

Want to organize your own Uke-Bike-Boat tour? Check out: UkuleleAdventures.com 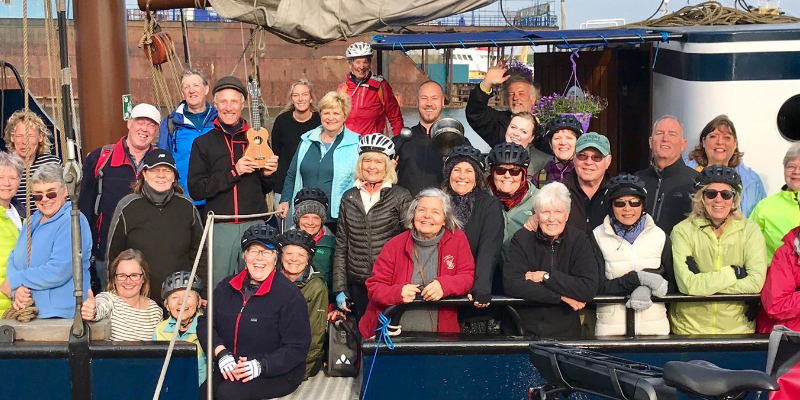 Who is Ralph Shaw?

Ralph Shaw is an entertainer and a gifted songwriter with an infectious joy of performing. He has appeared in USA, Canada, Australia and Europe. Ralph’s ukulele workshops are a tour de force, helping new and experienced players get to grips with their instrument and performance technique.