> Blog > The difference between Holland and the Netherlands

Is it Holland or the Netherlands?

Did you ever wonder which is the correct name for the land of windmills, clogs and tulips? Well, you’re not alone. And you’re certainly not the first!

Here we set the record straight for the true name of this low-lying land. 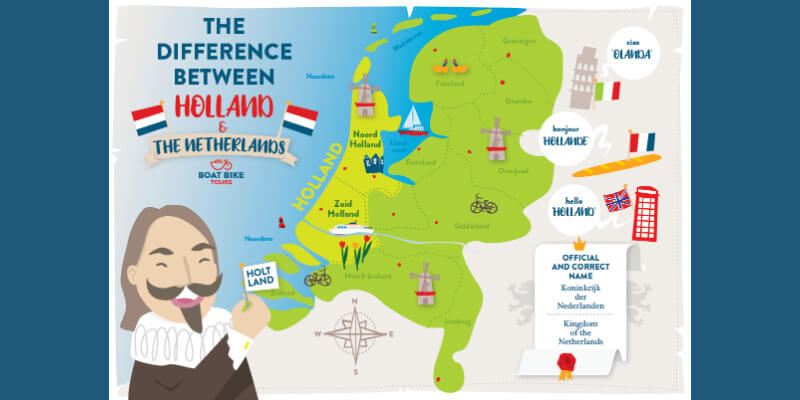 The correct name of the Dutch nation

The official and correct name for the home of the Dutch is the Koninkrijk der Nederlanden, or the “Kingdom of the Netherlands”. This is usually shortened to “the Netherlands”.

The terms Nether or Neder are derived from Germanic words meaning “low”, which combine with lands or landen to mean “lowlands”. This corresponds to the geography of the area which is barely higher than sea level, if not below it!

Holland as a name dates back to the 11th century and is most likely derived from holt land, meaning “wood land”. Originally ruled by the Count of Holland, it was a county covering the north-western corner of today’s Netherlands. As the centuries and generations passed, this county became a province.

Holland emerged as the most politically and economically active of all provinces in the Dutch Republic of the 16th to 18th centuries. It was also home to important cities like Amsterdam, The Hague, Rotterdam and Leiden.

It was during this period that Hollande in French, Olanda in Italian and Holland in German and English were adopted abroad as misnomers (or inaccurate names) for the Dutch nation. Thus, through common use in other European countries, the name Holland came to informally represent the Dutch region in general.

Today, Holland as an official province doesn’t even exist anymore. What happened to it? Holland was split to become North Holland and South Holland in 1840.

What name should we use today?

History is all very well, we hear you say, but how should I use these two names correctly today? Well, even though the Netherlands is officially the correct title for this nation, there are still some international situations when the Dutch not only accept the name Holland, but even use it themselves.

For example, the Dutch tourist board operates “holland.com” as the national tourism website. It’s the same for “hollandtradeandinvest.com”, a website commissioned by the Dutch Ministry of Foreign Affairs to attract international trade and investment.

When sightseeing, locals don’t bat an eyelid if foreign visitors refer to the nation as Holland, while in political and business circumstances, the country needs to be referred to formally as the Netherlands.

And if you’re supporting the Dutch when they play football in the World Cup, what do you think you should cheer? Well… “Hup Holland Hup!” of course!