> Travel preparations > Finding your way with the bicycle junction network

Finding your way with the bicycle junction network

The Netherlands is a favorite of non-competitive cyclists mostly because of the flat landscape and the availability of well-maintained bicycle paths.

But there’s another thing that makes the Netherlands great for cycling that you may not know about: the bicycle junction network, or fietsknooppunten.

Sometimes called a traffic node network, this system of marking bicycle routes is what makes it remarkably easy to follow a Boat Bike Tour route.

The bicycle junction network is just what it says: a network of junctions where bicycle routes meet. Each junction has a number posted on an easy-to-recognize sign. Usually the signpost also includes arrows that indicate which direction to turn to get to the next numbered junction.

For example, junction 33 is in the village of Volendam. The sign at that junction says 33, but it also has arrows pointing to 51, 98 and 96. 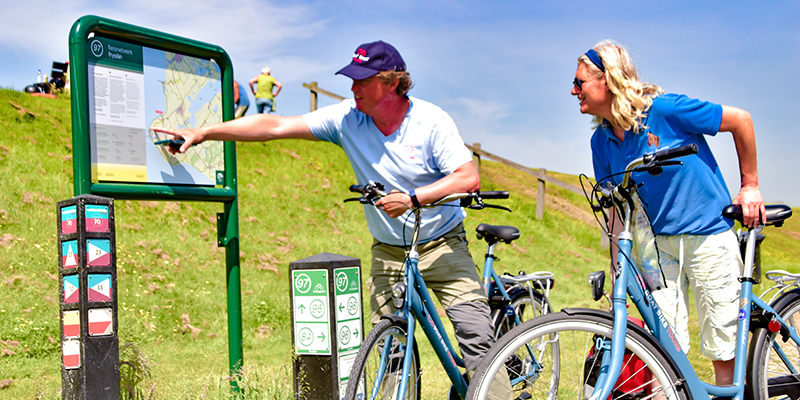 The whole country is laced with these routes. Some are regular roads, with or without separate bike paths along the side. Others are exclusively bicycle paths through natural landscapes or scenic areas.

All you really need to know to follow a route is the numbers of the junctions you will pass, in the order you will reach them. At each junction, you follow the arrow on the sign toward the next junction you want to reach.

This may sound complicated, but it’s really quite easy. Each day you will be given two ways to follow the route:

Both of these options will take you along the same route. The only difference is that, with the app, you don’t have to watch so closely for the junction signs. It will let you know when you are approaching a turn.

At the beginning of the week, you’ll also receive a map showing all of the week’s routes, so if you prefer, you can use that. 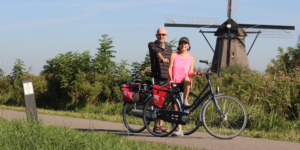 Boat Bike Tours chooses routes that are picturesque, passing a variety of landscapes and points of interest. The routes are sometimes bicycle paths away from roads: along the top of a dike, for example, or through a nature reserve. Sometimes they are along roads, but Boat Bike Tours will steer you clear of high-traffic routes as much as possible. If there isn’t a separated bike path, it’s a very minor road.

What if you want to take a different route?

If you decide you want to go see something that the route won’t pass, it’s no problem to diverge from the plan. Use the printed map you’ll be given to choose the route you want to go. Write down the junction numbers you need to watch for and follow that list instead of the one you’ve been issued. Plan the route so that it either returns to the set route or to where the boat is moored. Alternatively, make use of the map in the Ride with GPS app.

The combination of flat rides, well-maintained bike paths and easy-to-follow routes using the bicycle junction network makes for a relaxed day of cycling. Within the first day you’ll get used to using the junction signs, and you can just focus on the pretty scenery you pass.

This short video explains and shows how the cycling junction network works: https://youtu.be/LJbwxITBNhU