> Blog > 10 reasons why cycling in the Netherlands is so popular

10 reasons why cycling in the Netherlands is so popular

Some say that the Netherlands is a cycling paradise on Earth. Of course, at Boat Bike Tours, where we organize the most beautiful cycling cruise vacations, we tend to agree! Cycling is such a strong part of our culture that we’ve compiled some fun facts about why we love it so much. We hope you find it an inspiring read!

1. Cycling is a cherished part of daily life

In the Netherlands we really love riding our bikes. The average adult pedals about 1,000 km a year, and teenagers cycle twice as far! Everybody cycles, no matter how old. Cycling is just a lifestyle here – young professionals use their bikes for about 75 percent of their journeys, and a quarter of seniors ride every day.
Of course it helps that there are more than 35,000 km of dedicated bike paths in the Netherlands – with so many scenic bike routes, it’s just plain fun getting out on your bike! 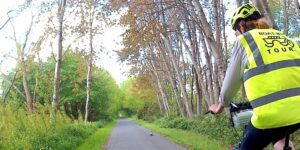 2. Babies bike from birth in the bakfiets

Bakfiets literally translates into ‘box bike’, a popular cargo bike that the Dutch use to carry almost anything (including children of all ages) from place to place. It’s not uncommon to see a mother, father, or even grandparent pedaling a bakfiets with two or three kinderen around the canals of Amsterdam. 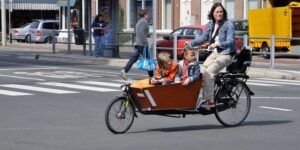 3. Traffic rules are so bike-friendly the Dutch don’t need helmets

The cycling infrastructure in the Netherlands is so well thought out that cycling accidents are surprisingly low, especially considering how many people bike. Special traffic-calming systems keep shared roads safe for two-wheeled traffic, reducing the risk of dangerous accidents. And since we do just about everything on our bikes – even going to weddings – a helmet just wouldn’t do! 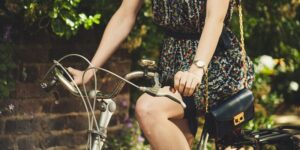 4. Spandex not required – unless you’re a racer

In other countries cyclists gear up in lots of spandex to get out on their bikes. But here they just wear normal clothes as most day-to-day travel is done on a bike. No one has time to change outfits five times a day, plus it’s so flat that you rarely work up a sweat. In the Netherlands, only wielrenners wear lycra, not your average cyclist. 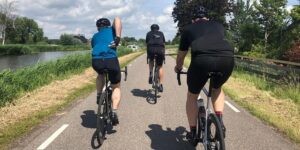 5. We have the world’s biggest bike garage

If your cycling tour takes you to Utrecht, check out the world’s largest bike parking lot underneath the train station. About 40 percent of travelers arrive here by bike, so the city needed infrastructure to accommodate all those wheels. Completed in 2019, this beautiful and functional garage can accommodate 12,500 bikes. 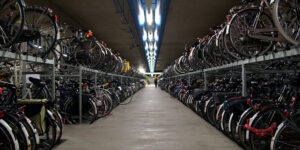 6. The Netherlands is the safest place in the world to cycle

The European Cyclists’ Federation compiles statistics about bike safety in Europe every year, and the Netherlands often takes top spot – probably a good thing, given our aversion to helmets! 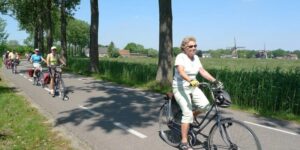 Us Dutch are proud of our green credentials, but we take it to a whole new level with solar bike paths. A 2014 pilot program near Amsterdam replaced the normal surface with a specially coated path embedded with solar panels. In its first year, the 70 mt-long solar bike path delivered 9,800 kWh of electricity to the grid. The concept has since expanded to other Dutch provinces. 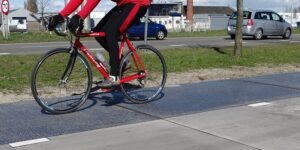 8. Bike rush hour is a strange thing of beauty

IIn Utrecht, a city of about 350,000 people, about 125,000 ride on a daily basis, with over 33,000 just on one of the main streets. Far from being a scene of chaos, it’s actually a beautiful, organically choreographed spectacle that you really should see to believe. 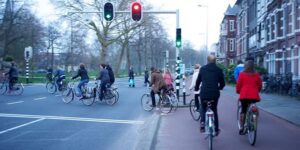 Many European cities are dog-friendly, but the Dutch give them an even greater sense of freedom as they sit in pride of place on a bike. You’ll see dogs biking everywhere with their owners: little dogs in baskets, big dogs in bakfietsen, and even ones balancing neatly on children’s bike seats. 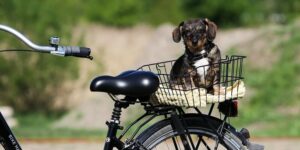 One of the most romantic ways to spend a holiday is to just cycle somewhere beautiful with someone you love. And if you want to stay close there are plenty of options: from tandem bikes to family bikes, or just holding hands riding along a canal. 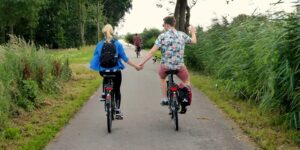 We hope this snapshot of bike life has left you inspired and enthusiastic about jumping on a bicycle at the next opportunity. You’re always welcome in the Netherlands for some great cycling adventures!