While it’s certainly not guaranteed, occasionally people are lucky enough to find a special someone on a Boat Bike Tour. Tour leader Fred tells the story of meeting his wife on the Gandalf:

On May 7, 2016, I started my work on the Gandalf to lead one of my favorite tours along the IJssel River in the east of the Netherlands: the Hansa Highlights Tour.

During the boarding procedures, I met Kristine. She came on board with a local Dutch friend of hers, who, as a kind of joke, said to me, “Take good care of her!” Kristine is a Canadian citizen who has a Dutch last name, and she pronounced it with a Canadian accent. I don’t always think before I speak, so I replied, “If you can’t pronounce your own last name correctly, we have some practicing to do this week!”

With her friend Linda, Kris had come over from Vancouver to do a bike tour through the Netherlands. She wasn’t much of a biker, but with an e-bike, it would be easier.

She told me the origin of her last name: she was adopted into a Dutch-Canadian family a few weeks after she was born. Her adoptive father had recently passed away and she wanted to travel back to his homeland with some of his ashes. Of course, she had been to Holland previously to see family and friends and to see the country, but had never traveled on a barge or a bike. 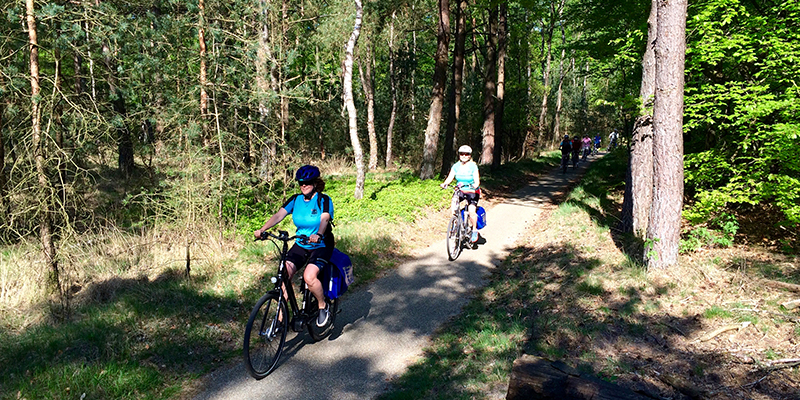 A party in Kampen and some reading glasses

The tour started and via lovely old harbor towns such as Wijk bij Duurstede, Arnhem, Zutphen and Deventer, we arrived in Kampen, a very pretty historical Hanseatic city at the mouth of the IJssel River. On Wednesday evening, I led a city walk in the center of the town. By coincidence we ended up joining a celebration of the 150-year jubilee of the local theater, a grand old building. There were free drinks, snacks and music; it was a great way to meet Dutch culture and hospitality.

On arriving back on the Gandalf with the group at 9:45 pm, someone realized they’d left their reading glasses at the theater. We had to run to get there before the doors closed at 10 pm.

I think you can guess, I think, who the owner of the glasses was. When we returned to the barge at 10:30, everyone was asleep. Kris and I decided to have a glass of wine to relieve the stress of the run. With a bit of music and the wine … it was midnight before we even noticed… 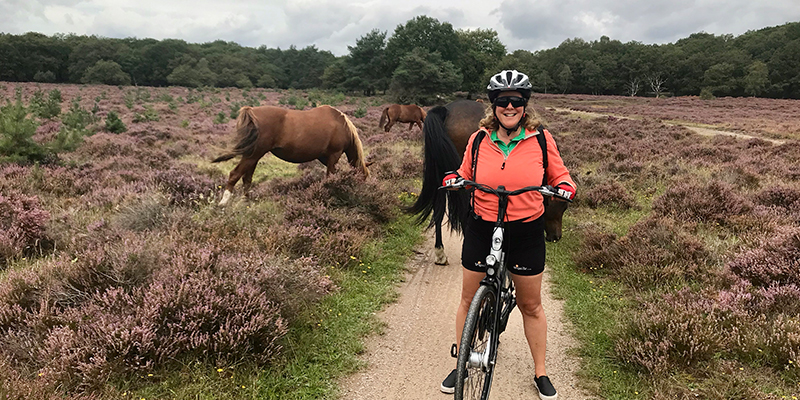 On the Gandalf, we and the rest of the passengers filled two big tables for 24 people all together: a family-style dinner every evening. Dinner on the Gandalf is a good experience as there are no empty seats, so you get new neighbors every day, if you want.

One evening, Hans Petrus, the owner and skipper of the Gandalf, showed his Dutch hospitality by inviting Kristine’s aunt and uncle to join us for dinner on board when we passed near their town. It was a great opportunity for Kris to see her relatives and a nice event for them as well.

To thank Hans for his gesture, Kristine insisted on buying him a bottle of Schipperbitter, a Dutch liquor and a frequently poured drink on the Gandalf.

When we docked back at the Oosterdok in Amsterdam, Kris wanted to ride into the center to find a liquor store. It didn’t seem like a good idea to me; cycling in Amsterdam is quite different from cycling out in the Dutch countryside. So out we went together to find a liquor store. On our way back, we decided to sit in the sun outside a café with a glass of white wine to celebrate the safe return of Kristine and a great tour through the eastern part of the Netherlands.

After the last night’s Captain’s dinner and all the instructions about disembarking, travel connections and taxi plans, the official part of the tour and my work for that week were done.  Most of the guests were ready to call it a day, except Kristine and Linda, who wanted to see more of the area. So with her Amsterdam friend Ineke, we went to a famous local bar in the heart of Amsterdam called Proeflokaal de Ooievaar (Try to pronounce that!) It was a perfect location to celebrate the end of a good week and it was an unforgettable evening. 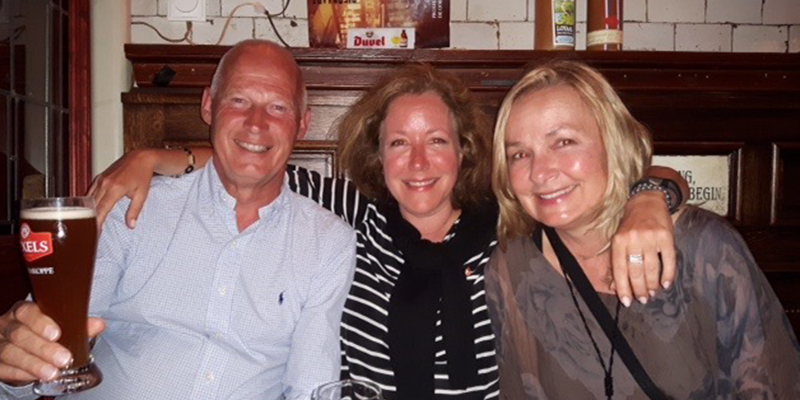 By coincidence, Kristine and I had to travel to Paris the next day. She was meeting some friends and I was scheduled to work on another Boat Bike Tour that we offer in France. We couldn’t travel together because my train was an hour earlier, so when I arrived in Paris, I waited for her in the Paris-Nord station to catch another glimpse of her … and to ask for her email address. After a big Canadian hug and kiss on the platform (where she also met her friends), she said, “If you ever come to Vancouver I’ll take you out for dinner.”

Of course it’s very unlikely that a simple bike tour leader from Holland would end up going to Vancouver in his lifetime. I realized that if I didn’t buy a ticket it would be a dead-end street.

And again … in Vancouver

After a few weeks of emailing I decided to see her again. On the 19th of July, I flew over for a week and we had an amazing time. Then, after finishing my work for the season in the fall, I went back to British Columbia to spend my first winter there. Since that trip I live in Vancouver and fly home to start my work as soon as Boat Bike Tours launches their Tulip Tours in the spring: the exciting start of the season.

It is a big step to leave your homeland. North America is such a different world with different rules to deal with and so on. And there is no cycling like cycling in The Netherlands, of course! 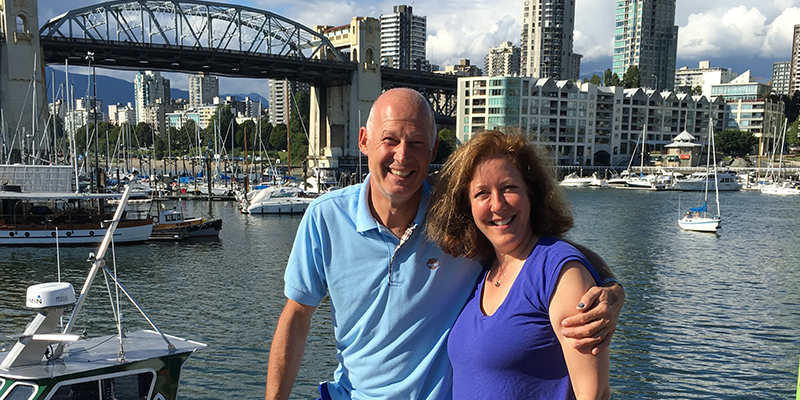 But there is more to life than cycling and I will not be able to cycle forever. So Kristine and I decided to walk the road of life together and got married on August 14, 2020. I can tell you it’s not easy to organize a wedding during the COVID 19 pandemic. But we had a great party with a small group of friends (keeping a little distance). And we will celebrate half a year of marriage on Valentine’s Day!

Of course, it’s our wish to take many more trips together, including to Holland. But this Corona pandemic has destroyed a lot of our travel plans. Kristine joined me on several trips before the pandemic, and we hope there will be more to come post-COVID. A few new trips have been added to the schedule that I am anxious to do, since there is no better way to experience the countryside! 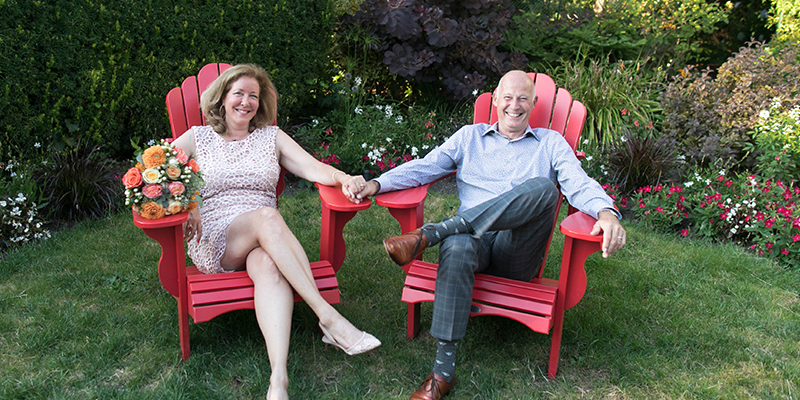